PinkSims51's Goth Legacy
Welcome to the Goth family album. Inside here you will find some of the favorite pictures as you watch the progression of the family tree.
The Goth Legacy
Currently At: Generation 4
Founders
(Generation 1) 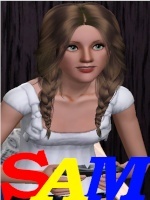 Looks awesome up to now! I can't wait for the next gen. And I love Bella's hair!

I have to agree Bella's hair is one of my favorites.

Their going to have to wait for a next generation though because their still teens.

But I do have "Woohoo-er" mod, so I could make them have a kid early if I wanted.

You could, would make it interesting!